There’s No Place Like Home — Except When You Can’t Afford One.

28 Oct There’s No Place Like Home — Except When You Can’t Afford One.

The Millennial generation (born between 1980 and 2000) is the most prolific and largest demographic in the U.S. today. Denver is the prime target of this generation and Millennials from both coasts are flocking here because this city and the surrounding areas have designed and invested in the infrastructure needed to attract this amazing unique market sector of young people! The Denver metro area is considered the Millennial Mecca for the state of Colorado and one can only imagine the opportunities that lie ahead for businesses and industry who appreciate and really understand how to connect and to access these amazing young people.

The Problem of Home Ownership

There’s no place like home — except when you can’t afford one.

Millennials have been priced out of some of the biggest U.S. cities, with residential real estate prices rising even as wage growth remains elusive.

Bloomberg used data from the U.S. Census Bureau, Zillow Group Inc. and Bankrate.com to quantify how much more money Millennials would need to earn each year to afford a home in the largest U.S. cities. The good news is that out of 50 metropolitan areas, 37 are actually affordable for the typical 18-34 year-old.

The bad news is that the areas that often most appeal to young adults are also the ones where homeownership is the most out of reach. 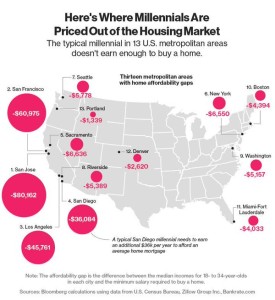 More cities and their information is available here.

Millennials and the Rent/Buy Decision: Are Construction Defect Laws a Factor?

A bill introduced in February 2015 in the Colorado legislature aimed to revise the current construction defect laws applicable to condominiums so that more condominiums would be built. These are considered the entry way to home ownership for most young people.

Hence this will provide the market another concept of home ownership for the Millennials.

The Economic Forecast for Denver

In addition, the 2015 Economic Forecast – researched by Patty Silverstein, chief economist for the Metro Denver EDC – reviews the events of the past several years as well as highlighting emerging trends for this year. The forecast includes national-level information and includes estimates for statewide indicators as well.

“Metro Denver will continue to benefit from solid economic performance in 2015.

Even as we experience increasing employment and confident consumers, we need to recognize that our aging and retiring baby boomers and well-educated and ready-for-the-workforce Millennials are changing the face of our community and influencing housing patterns and how we do business,” said Silverstein.

Compared with the national average, Metro Denver’s Silverstein forecasts job growth in 2015 to be 3 percent, which represents the addition of about 45,000 jobs.

“As the area continues to attract new companies, draw in talented workers, and promote entrepreneurship, Metro Denver will have better-than-average job growth (165,000 in 2014) and a lower unemployment rate than the United States and Colorado,” said Silverstein.

“With a forecasted average unemployment rate of 4 percent in 2015, our companies can expect to see a very tight labor market,” said Silverstein.

Silverstein also highlighted the demographic shifts that are changing the face of Metro Denver’s workforce.

“She noted that Millennials (born between 1981 and 1997) now compose the largest population group in Metro Denver.”

“While generation X and baby boomers dominate the workforce today, the Millennials are making their mark on the workplace and will represent the largest component of the labor force within 10 years,” she explained.

The population of Millennials has increased 58% between 2007 and 2013 in Denver according to the Denver Post.   As of 2015 there are 1.1 million Millennials living here in Colorado.

All of this points to the need for a Microtopia Village!

Sorry, the comment form is closed at this time.